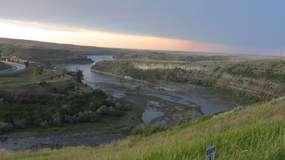 National Heritage Area Designation Will Cause Problems With Existing Use

There are multiple business owners that are very concerned about the threat to their way of making a living here in Montana. Agriculture industry is very established in Montana and a heritage area designation is being condemned by the ranching and farming industries. Montana Farm Bureau and other groups have openly opposed the designation as the collateral damage done will put families out on the street according to one of the property owners in the area.

Part of a bigger plan that we have been covering, the executive order that is moving forward to effect the 30 X 30 plan is looming on the horizon. The 30 X 30 plan adds 30 million acres of defacto wilderness eliminating the freedom enjoyed by private property owners in Montana. Rae Grulkowski a business/property owner in the area, states the proposed designation is an attack on private property rights and is being pushed without accountability here in Montana.

According to Rae, the designation will place regulatory restrictions on private property. Others we spoke to are calling this designation by unaccountable eco~extremists a domestic terrorism plot against property owners here in Montana.

Local government regularly faces a conflict of interest claim when elected and/or appointed officials serve on boards like the Big Sky Heritage Area. Great Falls City Commissioners both current and past have had direct associations with the heritage area board of directors. City Commissioner Rick Tryon stated he believes the city should stay neutral on this concept and stay focused on city issues. When we spoke to Mr Tyron, he stated he is hearing calls from across the city with concerns and opposition to the designation. He stated he is looking forward to the scheduled meeting on the 6th of July to hear from the voters.

The process of providing the legal foundation for making the designation lies with elected officials on the national level. With an overwhelming negative response from the citizens of Montana a call for help to Senator Daines is being sought by Rae and many of the followers of the Big Sky Heritage Area Designation.

Because Senator Tester regularly aligns with eco~extremists across America the call for local government action is growing.

EDITORS NOTE: “We here at Conservative News From Montana are open to the public to weigh in on This and other important issues so others can engage and be informed ”