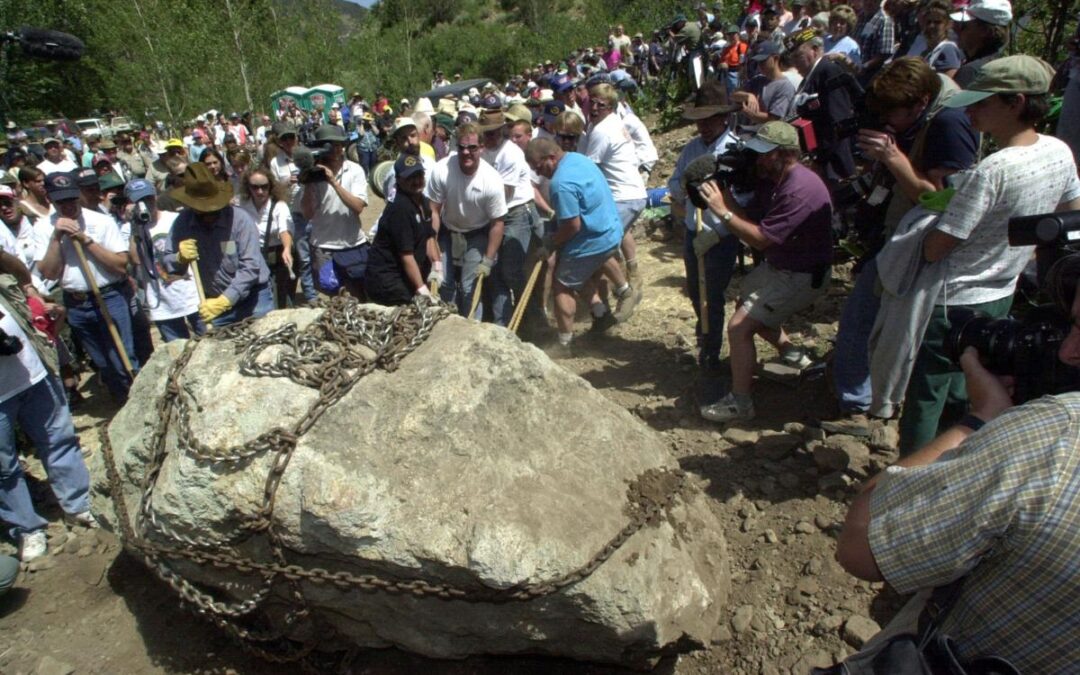 On July 4th 2000, Citizens from across the West converged on a small town in Elko County Nevada.

A small historic town called Jarbidge gained national attention on Independence Day 2000 because of the capricious and arbitrary actions by the federal government. An act of closing access to public land triggered an uprising. Groups from across the west mobilized on the call for help and an Independence Day Event called the Jarbidge Shovel Brigade took form.

The event in Jarbidge took place with citizens exercising civil disobedience by bringing over 10,000 shovels to where the United States Forest Service closed a historic RS2477 road accessing Jarbidge Canyon. A huge rock placed at the head of the access to a public campground was named liberty rock.

Montanans For Multiple Use and other organizations rallied to the call and participated in filling the truck that convoyed patriots into Nevada to reopen the road. The truck traveled with stops across Montana where shovels were loaded up to be used to reopen the closed road.

Federal agency officers were called to squelch the event but with hundreds of citizens converging on this small remote town in Nevada the rights of the people were echoed throughout the canyon. Some of the federal officers positioned themselves on the hillsides above the gathering on horseback armed and ready for confrontation.

The event brought forward a full recognition of arbitrary actions by federal officials without authority on management of public lands. The loss of jobs in the natural resource industries across the west prompted unemployed workers to be there in force to support taking a stand against tyranny.

Citizens from across the west are dealing with a full frontal attack on private property rights. The idea of taking a stand against federal overreach is based on political moves by the federal government. The rights of the people are lost under the agenda of protecting the climate. This issue in America is a moving target where the title is like the climate itself and is continually changing. The misguided federal and state administration directives are being led by eco~extremists pushing for the elimination of natural resource production including elimination of access for recreation.

Here in Montana the idea of restricting the rights of the people came to a full realization of government arbitrarily usurping unauthorized power. An article published by Redoubt News placed national attention on the usurpation of power under the Waters of the US law. Joe Robertson was sent to federal prison for placing some dirt in a spring fed historic mining settling pond. His rights were never recognized in a system that is run by eco~extremists.

Inventoried Roadless Areas are front and center with wild fire control being nearly impossible due to these designations. Recently, thousands of acres in Broadwater County Montana were lost to a fire in an area where inventoried roadless area managed by the United States Forest Service is a prime example of neglect.

With scenarios like this, private property is placed in danger due to loss of access to manage the resources as needed. The Broadwater County fire, although small compared to many wildfires, caused total loss of property to several families who lived in the area.

Ry Timber, with a long historic record of forest management, recently closed due to designations like the inventoried roadless areas where no timber production can be accomplished. These defacto wilderness designations render waste of natural resources and kill jobs that support the families in towns like Townsend, Montana.

We bring this article to the people here in Montana because there is a new action that needs to be highlighted that has taken place in Elko County Nevada. What this has to do with Montana news becomes a direct connection that is obvious.

It is a sign that the battles for rural America to provide the beneficial use of resources is accomplished at the local government level even if it means standing against unconstitutional acts by state or federal authorities, according to a resolution approved by Elko County on June 2, 2021. Under the resolution, the abuse of the constitutionally protected rights of citizens in Elko and Lander counties will be “dealt with as criminal activity”.

The following abuses will not be allowed or tolerated:

1) Registration of personal firearms under any circumstances.

2)        Confiscation of firearms without probable cause, due process, and constitutionally compliant warrants issued by a local or state jurisdiction.

3)        Audits or searches of a citizen’s personal affairs or finances without probable cause, due process, and constitutionally compliant warrants issued by a local or state jurisdiction.

4)        Inspections of person or property without probable cause and constitutionally compliant warrants as required by the 4th Amendment and issued by a local or state jurisdiction.

5)         The detainment or search of citizens without probable cause and proper due process compliance, or the informed consent of the citizen.

6) Arrests with continued incarcerations without charges and complete due process, including, but not limited to public and speedy jury trials, in a court of state or local jurisdiction.

7)        Domestic utilization of our nation’s military or federal agencies operating under power granted under the laws of war against American citizens.

8) Arrest of citizens or seizure of persons or property without first notifying and obtaining the express consent of the local sheriff.

“Under the leadership of constitutional-minded Sheriffs and elected commissioners, the two rural counties in Nevada decided to become “constitutional counties,” where the rights of citizens will be protected from all attacks. That means local authorities intend to uphold the entire Bill of Rights in those jurisdictions, and that even federal and state officials must comply with the US Constitution when there“

Sheriff Richard Mack from Arizona and Sheriff Jay Printz from Ravalli County Montana brought this very aspect to the front lines with a case that came before the people with the Brady law. Under that law, the legal authority of the federal government was called into question. That case went to the United States Supreme Court under Printz v United States. The court ruled on behalf of the people against the federal government overreach.

The Constitutional Sheriffs & Peace Officers Association has led the charge on defending the rights of the people and that commitment continues today right here in Montana. Ravalli County is leading in the effort to awaken the citizens in standing for their rights first.

In an earlier article we took a look at another part of this ongoing problem here in Montana and exposed the 30X30 plan. A resolution is being adopted by multiple jurisdictions on this effort to stand united here in Montana.