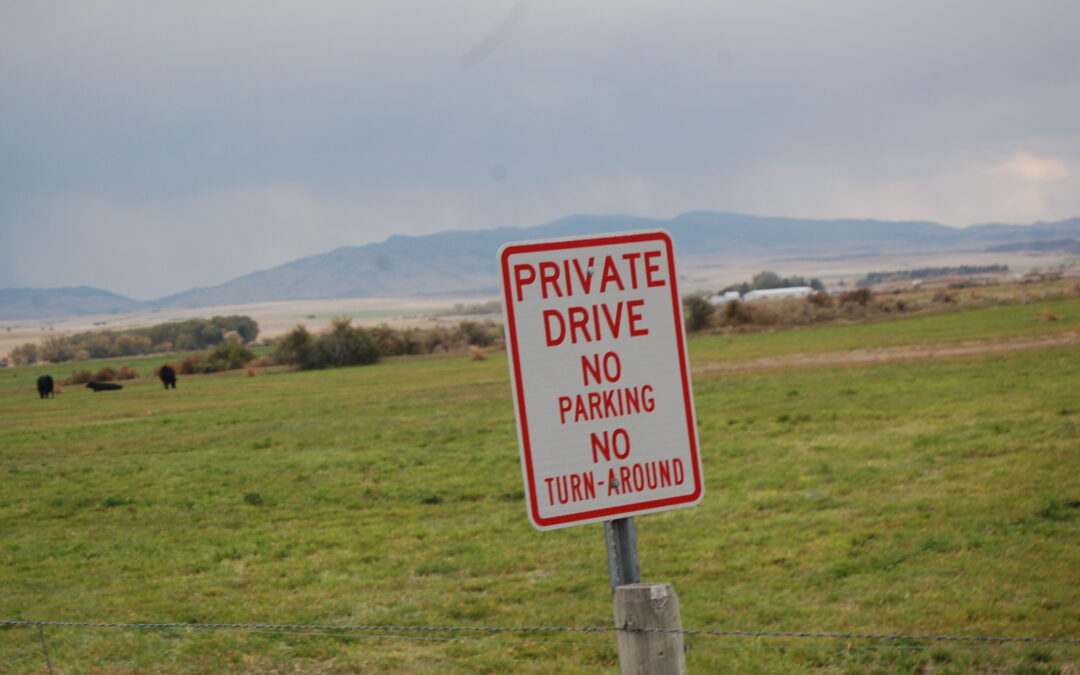 As Montana continues to grow with new subdivisions in nearly every county, the question of original rights and intent of access comes into question. As a new subdivision is established there is a procedure in place under Montana law. That procedure provides for an open process to examine each and every legal aspect of the development.

Private Property Rights and access is a historic question that can be missed in the development of property here in Montana. In some instances the legal process that is designed to protect those rights, may at times be aborted or ignored. Ingress and Egress is a procedural process that is Constitutionally protected with the ownership of private property. Recording easements and right-of-ways may not properly examine all parts of the equation. It is found that in some instances existing property owners affected by change are not given a seat at the table.

In some cases there is little to no questions brought forward in the process due to the lack of public awareness. Local government under Montana law is required to follow the procedure to the best of their ability. There are cases where a personal assumption is made that leaves the established rights of existing property owners in question.

Here in Broadwater County a new development that has gone through a minor subdivision process has brought forward a legal debate on an established private road. In 1998, a local ranch south of Townsend was split where Scott Mostad and his wife Dee bought a piece of the original ranch. They worked with the original landowner and moved a fence where they created Mostad Drive to their new home.

Montana Department of Transportation provided a process for an approach to the highway and all was checked off to create this new private road. Broadwater County also signed off on the development back then where everyone was in agreement on creating Mostad Drive as a private road. The road was recorded as a private road with Broadwater County. That recorded road splits the ownership of the road on the property line 30 feet each way. This is a practice that is predominant in most roads everywhere.

There is an ongoing contentious question of private property rights regarding Mostad Drive. Broadwater County acquired a large metal building from the United States Forest Service. For multiple years the building was stored in the county yard in Townsend. Broadwater Rural Fire District considered using the building to upgrade the Duck Creek Fire Station. That proposal was scrapped by officials for multiple reasons. There was another proposal to re-assemble the steel building on Shindoll property but due to the legal process with procurement that idea was also scrapped.

The building sat in storage for multiple years. The county hired a new public works director and due to ongoing ideas to expand the county facilities the building awaiting construction again was left off the table. In an eleventh hour decision by the Broadwater County Public Works Director Mary Hendrickson it was decided to move the building to land owned by her friend Jeff Stewart. Mr. Steward uses Mostad Drive to access his property which called into question the change in use of a private drive without going through a public process.

Under the federal procurement process the building would need to have access by the county for a period of 5 years before any ownership of the building could be transferred. Mostads openly questioned the use of Mostad Drive to facilitate this new agreement that failed to be made in public. The Broadwater County Rural Fire District elected official Ed Shindoll referred the legal question to the county attorney for clarification. We made multiple attempts over the past several years for an answer to these important questions, but to this date, that legal question has never been answered.

Rocky Mountain Supply (RMS) is in the process of development of a new facility in the newly created Meadowlark Subdivision. Mostad Drive immediately came to a point of contention in the development of the new RMS facility. The new change in use of the private road for commercial purposes is being questioned by the Mostad family.

We asked the Mostads if they were given a seat at the table regarding the new changes in the development by RMS. Mr. Mostad stated that the corporate leadership of RMS failed to provide an opportunity to participate in the planning of the new development. When Mostad Drive was brought up, concerns about established private rights was brought forward to the Montana Department of Transportation. These same questions were passed on to Broadwater County officials for clarification. Officials at all government levels declare this question to be a civil matter and not under local or state jurisdiction.

According to the Mostads, the new development of the RMS facility in the new Meadowlark Subdivision, rightfully raises the question of converting Mostad Drive from private to public use without going through the required process.

We asked the Mostads what they want to have take place in the development that is moving forward. Scott stated that he just wants RMS and the County to recognize the rights of the existing property owners and to ensure that the current and future use of Mostad Drive respects everyone’s private property rights.