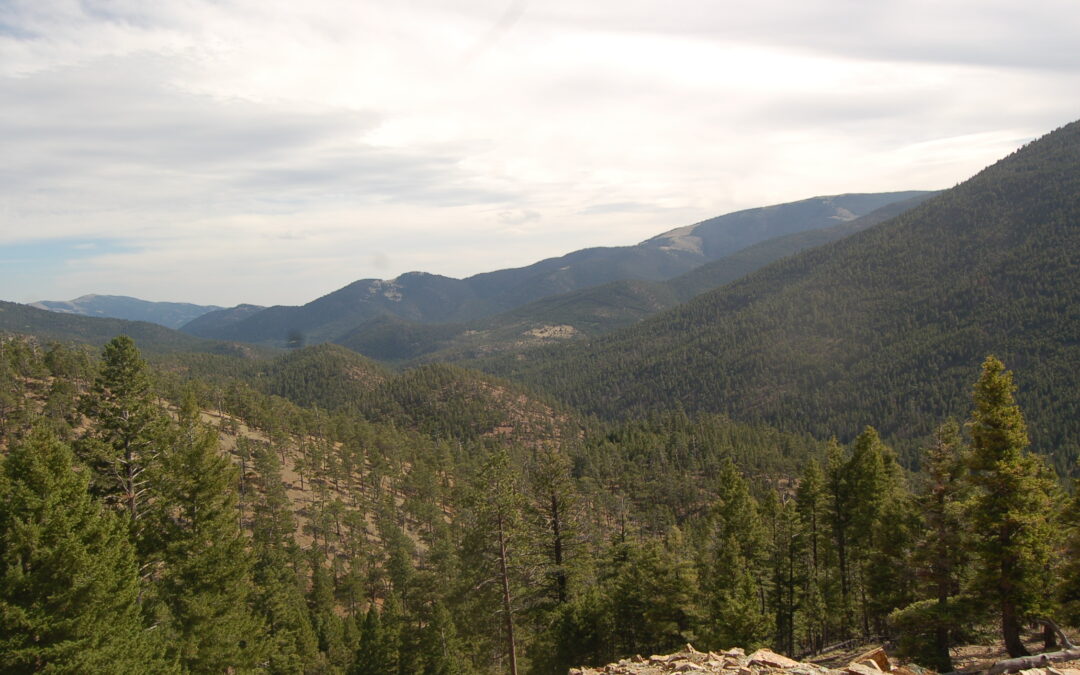 In Part 1 we introduced our audience to a regulatory takings case in Montana. A property owner in Lyons Creek near Wolf Creek in Lewis & Clark County found a system of regulatory provisions that effectively deny his right to enjoy his property. We touched base on the foundation of private property where ingress and egress to that property is founded in the Constitution codified by the 1866 Mining Act.

Since our initial look at this regulatory takings, there have been some new developments. Because the case was sitting before the Montana Supreme Court, we were looking to ensure that the truth was placed before the people. The case revolves around access to public land and private property. This access is inhibited by a conservation easement that ignores the rights of private property owners in the area.

The lower court ruled against Defendants Randy Adams and Lee McDonald who brought action before the court to exercise their rights to access their property. Lyons creek has only one access into the box canyon. The conservation easement that was instituted by two major landowners in the area effectively closed off all access to public land and other private property holdings in the area.

The Plaintiff in the case is the Baucus owned “Sieben Ranch,” and the adjoining O’Connell Ranch, who joined together multiple years ago to effectively control all land in the area. They eventually joined up with Montana Fish Wildlife & Parks, and other government agencies. The ranches entered into conservation easements into perpetuity. This action effectively closed off a majority of all land between Helena and Wolf Creek.

The Defendants Mr. Adams and Mr. McDonald owning property in the back end of Lyons Creek moved through a process to secure their property under the premise that all parts of their property and roads that are part of that property were protected from the land lock provisions of the conservation easement. Unfortunately the courts, influenced by well paid attorneys, manipulated agreements and influenced the courts which ruled against the Defendants.

The lower court, by operating under the directives brought forward by the plaintiff’s attorneys, determined that there was nothing indicating the defendants were wrong. However, the lower court still ruled against the defendants in the case bringing an appeal to the Montana Supreme Court.

Initially the Montana Supreme Court issued an opinion where the lower court did not rule correctly. In that original opinion challenged by the defendants, it was then brought forward with a corrected opinion confirming the earlier decision. In that amended opinion, the Montana Supreme Court apparently broke the golden rules of justice according to the defendants in the case.

In this case, the courts ignored multiple laws to effect the rulings.

Role Of The Judge — Preference To Construction Giving Each Provision Meaning

Montana Law 1-4-101MCA In the construction of an instrument, the office of the judge is simply to ascertain and declare what is in terms or in substance contained therein, not to insert what has been omitted or to omit what has been inserted. Where there are several provisions or particulars, such a construction is, if possible, to be adopted as will give effect to all.

This law was enacted in 1877 to ensure that the laws being written were held in trust by the courts without exception. Earlier history lessons showed where laws were being re-written by judges to provide legitimate rulings that were favored by friends and/or associates of the court.

According to the defendants, both sections 4 and 5 of the law here were ignored, which placed the courts in violation by arbitrarily ignoring the law in its entirety and therefore violating the rights of the citizens of Montana to access public land and water. Furthermore the road was never abandoned by the county, therefore providing access to two or more landowners.

Montana Law 70-17-106MCA The extent of a servitude is determined by the terms of the grant or the nature of the enjoyment by which it was acquired.

The law here was enacted in 1895 and again was to codify the rights of the people that were taking ownership of land in Montana.

Montana Law 27-8-301MCA When declaratory relief is sought, all persons shall be made parties who have or claim any interest which would be affected by the declaration, and no declaration shall prejudice the rights of persons not parties to the proceeding. In any proceeding which involves the validity of a municipal ordinance or franchise, such municipality shall be made a party and shall be entitled to be heard, and if the statute, ordinance, or franchise is alleged to be unconstitutional, the attorney general of the state shall also be served with a copy of the proceeding and be entitled to be heard.

Rule 52(a). Findings and Conclusions by the Court; Judgment on Partial Findings

Montana rules of procedure, Rule 52(a) Findings and Conclusions.

(1) In General. In an action tried on the facts without a jury or with an advisory jury, the court must find the facts specially and state its conclusions of law separately. The findings and conclusions may be stated on the record after the close of the evidence or may appear in an opinion or a memorandum of decision filed by the court. Judgment must be entered under Rule 58

(2) For an Interlocutory Injunction. In granting or refusing an interlocutory injunction, the court must similarly state the findings and conclusions that support its action.

(3) For a Motion. The court is not required to state findings or conclusions when ruling on a motion under Rule 12 or 56 or, unless these rules provide otherwise, on any other motion.

(4) Effect of a Master’s Findings. A master’s findings, to the extent adopted by the court, must be considered the court’s findings.

(5) Questioning the Evidentiary Support. A party may later question the sufficiency of the evidence supporting the findings, whether or not the party requested findings, objected to them, moved to amend them, or moved for partial findings.

(6) Setting Aside the Findings. Findings of fact, whether based on oral or other evidence, must not be set aside unless clearly erroneous, and the reviewing court must give due regard to the trial court’s opportunity to judge the witnesses’ credibility.

Defendants claim the court again ignored what is in law by setting aside multiple facts in the case refusing to include these facts in the final decision.

Rule 52(b) Amended or Additional Findings

(b) Kinds of Facts That May Be Judicially Noticed; The court may judicially notice a fact that is not subject to reasonable dispute because it:

(1) is generally known within the trial court’s territorial jurisdiction; or (2) can be accurately and readily determined from sources whose accuracy cannot reasonably be questioned (c) Taking Notice. The court (1) may take judicial notice on its own; or (2) must take judicial notice if a party requests it and the court is supplied with the necessary information.

Under this law the defendants clearly claim that there is a direct violation by the court for failing to to take judicial notice and ignoring facts from accurate sources on record.

Rule 19(a) Required Joinder of Parties

Persons Required to Be Joined if Feasible: (1) Required Party. A person who is subject to service of process and whose joinder will not deprive the court of subject-matter jurisdiction must be joined as a party if:

(A) in that person’s absence, the court cannot accord complete relief among existing parties; or

(B) that person claims an interest relating to the subject of the action and is so situated that disposing of the action in the person’s absence may:

(i) as a practical matter impair or impede the person’s ability to protect the interest; or

(ii) leave an existing party subject to a substantial risk of incurring double, multiple, or otherwise inconsistent obligations because of the interest.

(2) Joinder by Court Order. If a person has not been joined as required, the court must order that the person be made a party. A person who refuses to join as a plaintiff may be made either a defendant or, in a proper case, an involuntary plaintiff.

(3) Venue. If a joined party objects to venue and the joinder would make venue improper, the court must dismiss that party.(b) When Joinder Is Not Feasible. If a person who is required to be joined if feasible cannot be joined, the court must determine whether, in equity and good conscience, the action should proceed among the existing parties or should be dismissed. The factors for the court to consider include:(1) the extent to which a judgment rendered in the person’s absence might prejudice that person or the existing parties;(2) the extent to which any prejudice could be lessened or avoided by:(A) protective provisions in the judgment;(B) shaping the relief; or(C) other measures;(3) whether a judgment rendered in the person’s absence would be adequate; and(4) whether the plaintiff would have an adequate remedy if the action were dismissed for nonjoinder.(c) Pleading the Reasons for Nonjoinder. When asserting a claim for relief, a party must state:(1) the name, if known, of any person who is required to be joined if feasible but is not joined; and(2) the reasons for not joining that person.

On September 21st 2021 the Montana Supreme Court issued an additional order against the defendants in the case by denying their petition for a hearing on the matter.

The court references rule 20: provides that this Court will consider a petition for rehearing only
if the Court’s opinion overlooked a material fact or a question presented that would have
proven decisive to the case, or the decision conflicts with a statute or controlling decision
not yet addressed by the Court. This Court has reviewed the Petitions for Rehearing and
has determined that the Petitions for Rehearing do not satisfy any of the criteria in
M. R. App. P. 20. –

Again the defendants continue to claim the court is ignoring the facts before them and arbitrarily dismissing calls for justice by the people.

The people of Montana are being fleeced by the courts and lawyers that are ignoring the rights of the people protected under the constitution according to the defendants. While there are multiple other laws that provide for relief for the people, the actions here show how a corrupt judicial system fails. The premise of helping sportsman by providing hunting opportunities through conservation easements actually fails according to the defendants.

The access to the public lands in Montana are being arbitrarily locked up by this court. The defendants in the case are reviewing their options to continue this fight on behalf of the people of Montana.