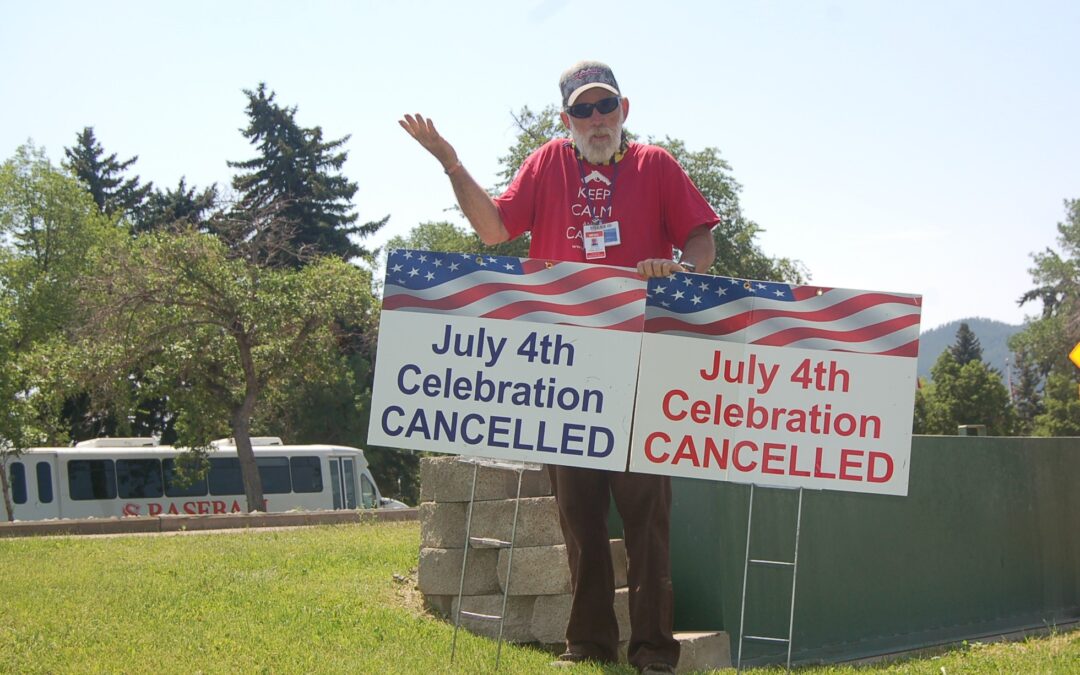 Traditionally, elected officials in Helena and Lewis & Clark County provided full support for Boy Scout troop 214 on Independence Day. This year it was decided to cancel the traditional “Raising Of The Flag” based on fear of endorsement of a public event where the annual average citizen participation would be around 2000 citizens.

The responsible officials however, decided that it would be appropriate to honor the tradition of “Raising The Flag” but keep the public out of the ceremony by waiting till the last minute to proceed with the event with restrictions.

It has become a practice for the Boy Scouts to participate in the flag raising ceremony each Independence Day. Because of the 2019 plandemic, elected officials decided to cancel the public event at the Centennial Park. The community landmark is the 30 X 50 foot American Flag waves over Helena Montana. The “Old Glory Landmark” with the giant flag was dedicated and put in place back on July 4th 2003. Since then the local Boy Scout Troop 214 has been caring for the flag with honor.

Sheriff Leo Dutton Dispatched an officer to oversee patriots that gathered for a flag waving parade that began out in the Helena Valley at Bob’s Valley Market. Multiple patriots from the area gathered and donned their vehicles with the American flag. The flag waiving patriot parade was organized by active members of the local Lewis & Clark County Republican Party.

Both City of Helena police, and Lewis & Clark County Sheriffs office have remained silent on the city decision to cancel the annual flag raising event.

Unable to hear her words, City of Helena Manager Rachel Harlow-Schalk provided a message to a hand full of citizens that were afforded the memo that the flag raising ceremony would be held. Without advertisement, the City of Helena left the citizens that traditionally take the time to attend the Helena Independence Day Events in the dark.

According to several citizens we spoke to, the opportunity to honor those that have sacrificed their lives and fortune in the name of liberty and freedom was denied by city officials.

Mayor Wilmot Collins did appear at the event but even though he arrived late, he did not actively participate in the ceremony with the exception of joining in the free hotdogs that are part of the traditional event. Mr. Collins met with committee organizers and City Manager off to the side.

The fact that the tradition of honoring the birth of the nation by the Old Glory Flag Raising ceremony is close to the heart of many patriots and veterans, Steve Netschert and fellow patriots brought the traditional hotdogs and beverages. The organizers of the event placed a call for the hotdog/pie function remain distanced from the ceremony even though everything was scheduled and took place in a public park owned by the people.

The following video is a small snapshot of the parade that was organized to show patriotic solidarity in Helena. The violin rendition of God Bless America placed the day into context according to several of the veterans that were there.

The views, opinions, or positions expressed here by the authors and those providing comments are the recordings of the individual rights of the people.  Some comments, opinions, or positions posted here may not agree with The Conservative News From Montana.  We will do our best to provide a venue for the people of Montana to have your voices heard.  Social media, including Facebook may not want your position heard so please take a moment and consider sharing this article with your friends and family.  Thank you!