Tyranny Put In Its Place In Missoula 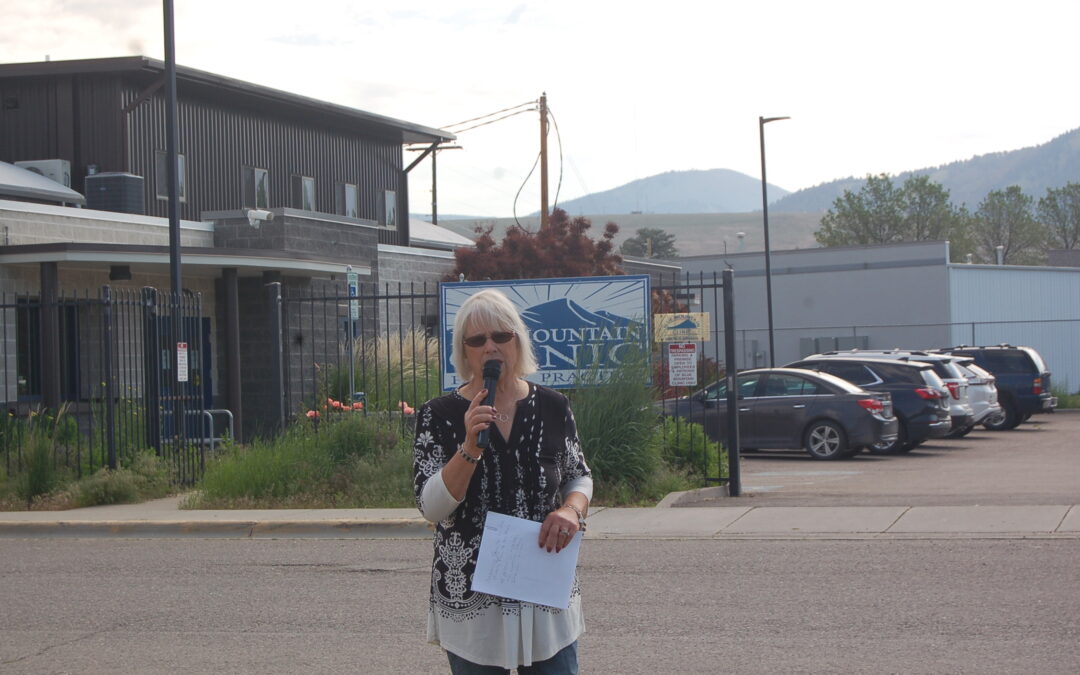 Montana Health Care has been front and center for the past 2 years based on the tyrannic plandemic. The rights of the people have been severely strained at so many levels. One citizen in Missoula Montana is on the front lines protecting the rights of babies and life itself. Her cry for justice has fallen on deaf ears for years but she continues to stand for the unborn.

Over a year ago we visited with Marilyn Hatch of Missoula who was being harassed by the Missoula city police for exercising her First Amendment Rights. In that interview we pointed out that The Blue Mountain Clinic in Missoula is in effect an abortion clinic operating under the premise of providing family health services to the community.

Marilyn is very passionate about protecting life from the beginning. In our interview she pointed out that many times those providing abortion services fail to acknowledge the funding sources provided for those services and where that funding is applied. With today’s society looking at entitlement programs, it is not surprising to see this as common practice.

Blue Mountain Ciinic has a background that has horrified many citizens of Montana. In July 2019 Redoubt News-Montana exposed the clinic for bringing in transgender exploitation in Missoula by a doctor out of Seattle Washington. In 2012 the clinic proudly recognized their funding opportunity from a grant from the Pride Foundation.

In the fall of 2020 across the street from the Blue Mountain Clinic we visited with Marilyn. It was revealed that Marilyn had been getting threats from the city officials without justification. The threats of retaliation against Marilyn were based on complaints filed by employees or management of the Blue Mountain Clinic. Because those complaints were done in secrecy, the identity of those filing complaints are still to this day unknown.

None of the complaints ever substantiated any wrong doing and failed to result in any charges against Marilyn. While we were visiting with Marilyn across the street from the clinic, city police officers cruised by a couple times but did not stop.

Marilyn had signs that were placed on public property providing a message to anyone that went by and/or were interested in protecting life. Marilyn has been going to this location once a week to bring attention to the practice of taking life. None of the previous encounters with the police resulted in any charges or even an official public investigation.

On March 10th 2021 another anonymous complaint was called into the city police. Officer Ben Slatter (Badge #0325) responded to 610 N. California Street. Marilyn was at this location as usual with her signs protesting the clinic’s practice of abortion. In his initial response, Officer Slatter talked to Marilyn and saw no problem with her being on the public sidewalk and left. Later that afternoon Officer Slatter returned with a citation for violating 45-8-110MCA. It was then that he issued the citation that alleged Marilyn violated the law by blocking access to the Blue Mountain Clinic.

The citation issued states “The defendant did knowingly or purposely or negligently committed the offense of violating 45-8-110MCA”:

“Obstructing Health Care Facility Access by obstructing entry to the Blue Mtn Clinic. By being w/in 36 feet of the entrance displaying a sign or protesting w/o consent”

Violations of the freedom of speech and press is the foundation of the 1st Amendment. Crying for help in defending her rights, Marilyn was contacted by the Thomas More Society that specializes in cases where the rights of the people to exercise their freedom is paramount. The firm joined Missoula Attorney Quentin Rhoades in Missoula and openly declared a tragedy and initiated action against Missoula officials.

Settled in law, the act of creating a “Bubble Zone” is a direct violation of the freedom of speech protected under the First Amendment of The Constitution Of The United States.

Enforcement of statutory law is often taken in context of opinion and an official’s interpretation of the law. The merits of a complaint may at times not be fully reviewed prior to the filing of charges. This practice is also often combined with a desire for quick resolution of the dispute within the judicial system. Many times the defendants in these cases cannot afford an attorney and are often offered a deal. Rather than fighting a battle with little or no resources many times the case is settled so people can move on with their lives.

It is also well founded in Montana law that the rights of the people to exercise their freedom of speech shall not be infringed on public property. It is the provision of 45-8-110MCA, that a sign or message delivered within 36 feet of the entrance of the clinic, violates the the constitutional right to protest or educate about a public health issue. The public sidewalk where Marilyn exercises her rights is far outside the distance from the entrance to the clinic.

It was determined that the details in the citation and the physical location of the clinic and the public property where Marilyn regularly stands to advocate for life, is not within the parameters of 45-8-110MCA. The Constitutional rights of the people is showcased again in legal overreach in Missoula. This is yet another case that is sending a message to all government officials across Montana and beyond.

Appropriately Mr. Heffron advised the city that: “It would be a wise decision on their part to dismiss this case. If they had persisted in the charges against Mrs. Hatch, they would have lost.”

Senior Deputy City Attorney Lowney attempted to get further clarification on the law from Montana Attorney General Austin Knudsen. That effort produced the fact that the freedom of speech and the rights are not to be infringed based on an opinion of someone that basically disagrees. The law in itself has not been officially declared unconstitutional, because the case never went to court. However, the case clearly shows the abuse of Marilyn Hatch and her rights and highlights the use of 45-8-110MCA in this case is indeed a violation of the Constitution.