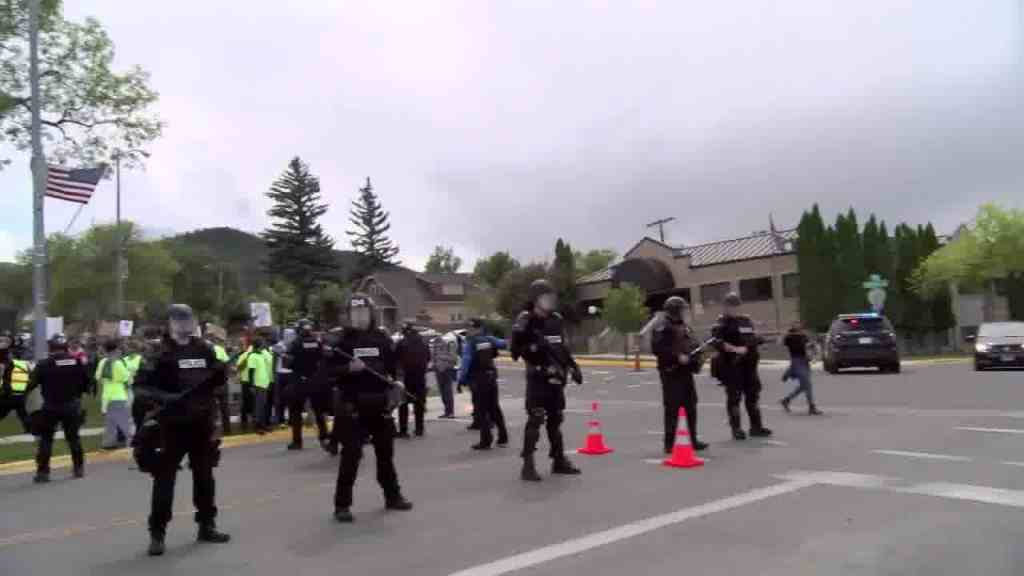 Back in June 2020 a protest at the Montana Capitol by supporters of the black lives matter (blm) movement did not take long to place the city of Helena police on alert. Unfortunately members of the group regularly shouting chants against police and citizens that disagree with the protest. This escalated concern from many in the city of Helena

Early in the event Mayor Wilmont Collins in full support of the protest joined with a message from his office. It was not long after the delivery of that message, a citizen posing as a police officer attempted to disrupt the event. The officers of the Helena police department were dispatched quickly to diffuse the situation.

At the same time the blm protest at the Capitol was being played out, patriots from the Helena area were gathered to hold a patriot parade. With many patriots displaying the American flag on their cars, the organizer of that event Shirley Herrin led the parade around Lewis & Clark County avoiding down town Helena as a courtesy to the Helena police.

At the conclusion of the patriot parade some participants of that event decided to drive by the Capitol with their flags waving as a means of a peaceful counter protest. That action triggered an outcry from the blm protesters bringing them into the street screaming profanities, showing the fist insignia of communism.

It was not long before Helena Chief of Police Steve Hagen ordered Montana Street closed to provide a level of public safety. Recognizing the right to protest was being accepted by Chief Hagen with a close eye on the concept of a peaceful protest.

With a social conflict regarding blm and its foundation linked to communism and unrest including violence emerging with the blm movement a handful of citizens stood on guard against violence to the citizens and Helena police by blm protesters. There were 13 armed citizens standing guard ready to assist the police in the event that the protest escalated to violence.

With tensions rising Chief Hagen determined that it was necessary to take additional contingency action to ensure safety of the citizens of Helena. He further determined it was essential to deploy the unit to stand between blm protesters and the 13 armed citizens to prevent further escalation.

Bringing armed police officers into the street to maintain safety quickly pushed the blm protesters back out of the street and they began to disperse. Unfortunately multiple blm protesters shouting profanities aimed at inciting a response from the police and/or the armed citizens continued.

An exchange of derogatory expletives between a Helena mother and a blm protester were being watched by police officers. With multiple scenarios playing out at the scene the police officers had their hands full observing, assessing and adapting to the needs for public safety.

Chief Hagen made multiple inquiries to witnesses and testimony including video recordings of the incident. The blm protester alleged that the mom struck her so she allegations lead to a claim of self defense. The Helena mom claimed that she did not see the protesters coming down the sidewalk from behind her and that contact was made accidentally.

After an investigation by Helena police, misdemeanor assault charges against the Helena mom were filed in court. Redoubt News-Montana who was on scene filming was unable to capture the initial conflict. Because there were various unsubstantiated claims regarding the encounter more information was sought.

Investigative Journalist for Redoubt News-Montana Tim Ravndal, after multiple interviews in good faith made a request to Chief Hagen to see copies of the body-cam videos taken by police officers. Chief Hagen and the Helena city attorney approved the freedom of information request. With respect to the privacy of officers and those interviewed, their names were not disclosed. The right to privacy outweighs the public’s right to know under the Constitution of Montana.

Under the clear duty of Chief Hagen and respect for the public information laws, Captain Curt Stinson provided Redoubt News -Montana a viewing of the body-cam videos. The videos clearly show actions by police were made in the best interest of public safety. Mr. Ravndal extended his gratitude to Mr. Hagen and the police department for their hard work under these trying times.

The Helena mom that was charged eventually entered a plea agreement in the case to facilitate the end of further financial and personal impact to her and her family. It is not known if the blm protester that filed the complaint has ever been challenged on the validity of the complaint but both sides of this have produced awareness to respect.

It is obvious to all who were interviewed and those following this story we are thankful for the hard work that the Helena Police are faced with including but not limited to the dangers they face each and every day. blm protesters on the contrary claim all police are out of control and should be de-funded across America. Here is an email to send thanks to the Helena Police Department in their service to the community and the citizens of Helena.