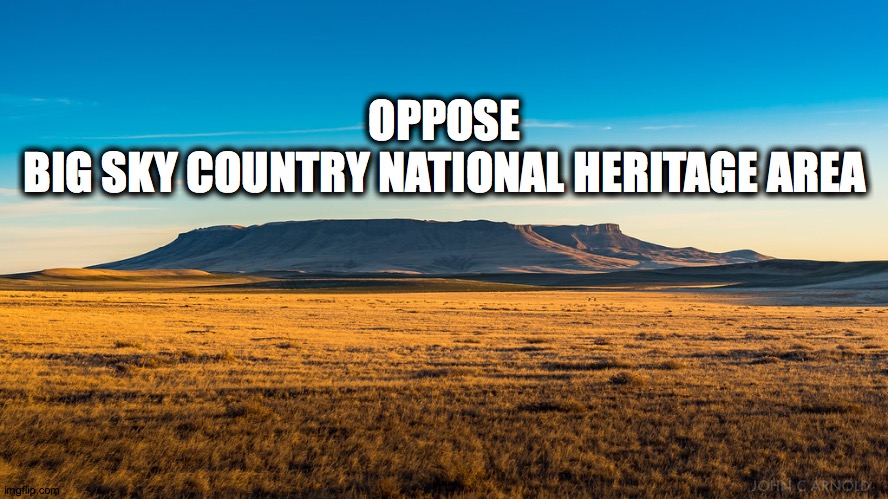 When I first learned of a plan to create a National Heritage Area (NHA) in Central Montana, I initially wasn’t opposed to it. At that time, I heard inklings that the proposed area was mainly located along the river in Cascade and Chouteau counties and perhaps into Lewis and Clark County to the Gates of the Mountains. The NHA would supposedly create economic development through historic and cultural tourism and would showcase our historic sites. That didn’t sound concerning.

I discovered that National Heritage Areas are pork-barrel programs, managed by non-elected groups under the auspices and guidance of the National Park Service, with the very real potential of impacting the private property rights of those landowners located within the NHA boundaries.

During my initial research, I also discovered the proposed NHA area here in Central Montana had expanded from a narrow river corridor in two or perhaps three counties, to include ALL OF CASCADE COUNTY and parts of Chouteau and Fergus counties.

Most people that I’ve talked to know nothing about this proposed NHA, or have even heard of it. I attended what I thought was a public meeting in early 2019 in Black Eagle about the NHA, only to find that the public wouldn’t be allowed to comment or ask questions at the meeting for all in attendance to hear. Friends who attended the NHA meeting in Belt last Fall reported the same.

WHAT ARE NATIONAL HERITAGE AREAS?

According to the National Park Service, “National Heritage Areas (NHAs) are designated by Congress as places where natural, cultural, and historic resources combine to form a cohesive, nationally important landscape….NPS partners with, provides technical assistance, and distributes matching federal funds from Congress to NHA entities. NPS does not assume ownership of land inside heritage areas or impose land use controls” National Park Service website.

The first NHA. the Illinois & Michigan Canal National Heritage Corridor located in Illinois, was signed established in 1984. There are currently 55 National Heritage Areas scattered throughout the country. Each NHA receives funding under the National Park Service.

National Heritage Areas have sunset provisions, meaning they are to become self- sustaining and no longer dependent on federal funds. So far, none of the 55 NHAs have become self-sustaining and instead are a perpetual drain on the federal bud- get, with the older NHAs receiving reauthorization for more years-worth of our tax dollars.

National Heritage Areas are created through Congressional designation, so Sena- tors Tester and Daines, and Representative Gianforte would be responsible for introducing and supporting this in Congress.

“National Heritage Area designation follows a two-step process: completion of a feasibility study (rather than an application) and introduction of authorizing legislation in the U.S. Congress…

Most, if not all, NHA enabling documents contains language that, according to proponents, is designed to protect private property rights by allowing property owners to refrain from participating in any planned project or activity within the heritage areas, not requiring any owner to permit public access to property and not altering any existing land use regulation, approved land use plan, or other regulatory authority.

“National heritage areas are preservation zones where land use and property rights can be restricted. They give the National Park Service and preservation interest groups (many with histories of hostility toward property rights) substantial influence by giving them the authority to create land use “management plans” and then the authority to disburse federal money to local governments to promote their plans.” National Center for Public Policy Research, 2007 letter sent to congressional leaders and pertinent committee members.

One astute Chouteau County rancher I spoke with pointed out to me that even though landowners aren’t required to allow public access to their private land with- in the NHA, once the border for the NHA is drawn on a map and your land is included within that border, it is realistic to think that a tourist, not knowing any better, would think the whole area within that border is open to them. I had to agree with him.

I also learned that Fergus County at one time was included in the BSCNHA, but due to public outcry over concerns about bureaucratic overreach and private property rights, the county commissioners unanimously voted to oppose inclusion in BSCNHA and the county was removed.

So you may wonder if and where negative impacts have occurred in conjunction with National Heritage Areas. If you ask the National Park Service or BSCNHA Inc, they will tell you there have been no negative impacts or complaints. That’s what was stated at the so-called public meeting I attended but it’s not true. Here are just a few of the examples I’ve found.

“In Wheeling, the legislature designated the downtown area as a National Heritage Area in October 2000 when it passed the Wheeling National Heritage Act (WNHAA). This act created the Wheeling National Heritage Area Corporation (WNHAC) to manage and redevelop the area. In 2002, The WHNAC proposed to con- vert 90 percent of downtown Wheeling into a ‘Victorian-themed outlet mall.’ This plan would have condemned properties and transferred them from their present owners to private retail businesses chosen by City officials (Berliner 2003). Fortunately, the West Virginia Supreme Court ruled the financing of the plan unconstitutional in May 2003.” Unleashing Capitalism:Why Prosperity Stops at the West Virginia Border and How to Fix It, Russell S. Sobel, Ph.D. Editor, Chapter 7, Edward J. López, Carrie B. Kerekes, George D. Johnson.

“When Augusta Canal NHA was undergoing initial approval, the National Park Service urged the House Resources Committee to withhold federal funds from Augusta Canal until a commitment was shown by those overseeing the creation of the NHA to implement stricter zoning laws and even create a state park.” Great National Land Grab, Peyton Knight, 2003

As a first step, each of the jurisdictions within the Heritage Area that has not al- ready done so will need to recognize the JTHG National Heritage Area and related parks, trails and sites in its comprehensive plan and identify its resources and qualities as a priority for conservation and preservation in the county. The JTHG Partnership will work to ensure that all counties participate in NHA initiatives and recognize the NHA in their plans. Journey Through Hallowed Ground National Her- itage Area Management Plan, July 2012

“A few years ago, Lee Ott was driving around his vegetable farm in Yuma, Ariz., when he spotted a crew of surveyors putting stakes in his land. “I stopped and asked them what was going on,” he recalls. It turned out they were marking the boundaries of the Yuma Crossing National Heritage Area. Ott’s farm fell entirely within its 22 square miles, and nobody had bothered to tell him. “I became worried because I wanted to build a new house and a shop on the farm,” he says. “I didn’t need anybody to give me a bunch of rules about how they should look or whether I could even build them.”

So he decided to fight back. He met with the Yuma County Farm Bureau, which then contacted all of the landowners within the Yuma Crossing National Heritage Area. “About 600 people came to our meeting,” says Harold Maxwell, a farm- equipment distributor. “When I asked for a show of hands from those who knew they were in the NHA, only one hand went up.”” The Nation, An Ugly Heritage— The Poor Man’s National Park, John J. Miller, January 28, 2008

“When the Yuma Crossing Heritage Area was authorized in 2000, the public in Yuma County did not understand the scope of the project and was surprised by the size of the designation. Concerns were raised by citizens about the size of the designation and the potential for additional federal oversight. The fear of adverse impacts on private property rights were realized when local government agencies began to use the immense heritage area boundary to determine zoning restrictions.” Report 109-294 attached to H.R. 326, Representative Richard Pombo, Committee on Resources, U.S. House of Representatives, 109th Congress.

“National heritage areas are preservation zones where land use and property rights can be restricted. They give the National Park Service and preservation interest groups (many with histories of hostility toward property rights) substantial influence by giving them the authority to create land use “management plans” and then the authority to disburse federal money to local governments to promote their plans.” National Center for Public Policy Research, “Coalition Letter Detailing Risks of National Heritage Area Designation,” September 4, 2007, www.national- center.org/NHACoalitionLetter0907.pdf.

Private land is included within the NHA boundaries without the owner’s con- sent. No notification is given to landowners of NHA management actions.

A private group or organization will manage the NHA. They not accountable to the public for their management actions. They are not elected and there- fore, if you don’t like what they do, you can’t vote them out.

The National Park Service oversight for the NHA adds another layer of government bureaucracy.

SOLUTION LOOKING FOR A PROBLEM

Local, state and federal regulations and programs and private nonprofits al- ready exist to promote the economy and preserve the history and heritage of Central Montana. NHA designation duplicates those efforts.

None of the National Heritage Areas in existence have become self-sufficient and are chronically dependent upon additional federal funding at taxpayer expense.

National Heritage Areas funnel resources away from the National Park Service’s main mission of taking care of already existing national parks. NPS money is better spend toward backlogs of over $131 million and $585 million in Glacier and Yellowstone National Parks respectively.

WHAT CAN WE DO TO OPPOSE BIG SKY COUNTRY NHA?